The life of an unknown man, Andreï Makine 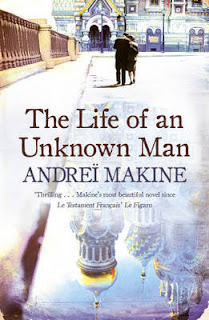 The Russian author Shutov asked for politican asylum in France many years ago. He published some novels, but none of them have been very successful.

He tells himself that this is because he does not feel at home in the world of modern literature, but he knows it is because he never really integrated into western society.

When his girlfriend breaks up with him (fed up with his whining about how the authors used to be so much better in the good old days), he wants to go back to Russia. The Soviet union fell and there is no reason for him not to go back to his motherland.

He hopes he will find the country he left, the woman he loved and the memories they all shared, but instead he finds a country that he does not recognize. A country that has become capitalist to the bone, and where nobody has time for the past and where people want to forget their memories as fast as possible.

While Shutov stays with an old friend, he meets an old man who tells him his lifestory. A story nobody wants to hear and nobody is interested in. A story about the siege of Leningrad, the terror under Stalin, the camps, but also about love, memories and going on despite having lost everything.

Shutov realizes that he has more in common with this old man nobody listens to, than with his old friends. The Russia of his memories is gone and he has nothing in common with the new Russia.

Andreï Makine was born in the Soviet Union and asked for political asylum in 1987, where he began to write novels.

He spoke and wrote French fluently, and wrote directly in French. Only the publisher did not believe an immigrant could write in French, so he had to say his books had been translated from Russia to get them accepted.

His fourth novel (Dreams of my Russian summers) was his breakthrough and he received many French literary prizes for it.
Since March 2016 he has been elected as a member of the Académie Française.

The life of an unknown man is heartbreakingly beautiful, I cannot express it in another way. The siege of Leningrad was a horrible period in time that he manages to describe touchingly, for example in the scenes with the theater in Leningrad, where the public has no energy left to applaud.

The end is also beautiful, both the scenes where Shutov and the old man meet for the last time and the time when Shutov comes back to Russia for the second time.

There are many books about the siege of Leningrad and the horrors under Stalin, but Makine manages to avoid clichés and story that have been told before. He brings something new into it, and this makes you interested in the story until the very last page.

I also loved the references to Russian literature, especially Chekhov, these give another dimension to this book, that already has so many dimensions. I really admire the way this was done.

I love it when I discover a new author, (new for me), and I love his books and I know I have all his other books to look forward to.

The life of an unknown man was absolutely beautiful and I can only say that this won’t be the last time that I review a book by Andreï Makine!