She received her education at an artacademy in Leeds and later at the Royal Academy in London. Here she became friends with that other famous sculptor, Henry Moore.
She went to Rome and married sculptor John Skeaping. Together they worked in their studio, first in Rome, later in London. They were good friends with artists like Picasso, Mondriaan and Brancussi and their work became more and more abstract.

Barbara Hepworth worked with Stone and wood and often tried to capture nature in her works. She said that her sculpting could not be seen without the context of their surroundings. That is why she often took a great interest in where her works would be placed.

Organic forms, seeing through something, emphasizing the emptiness and its form are all characteristics in her work.

She was also known for working without the help of electric drills or instruments like that, she did it all by hand. 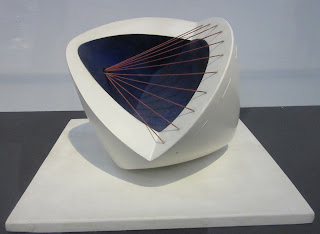 Private life
There were high highs and low lows in her private life. When her marriage to John Skeaping ended in 1933, she married painter Ben Nicholson, but that marriage also ended in a divorce in 1951. Her son Paul died in a planecrash.

Just before WWII she moved to St. Ives in Cornwall and she lived here until her death in 1975. Her death was a drama, she died in an accidental fire in her studio.
Her house and studio in St. Ives are now a museum.

During her life Barbara Hepworth received many accolades and prizes. She could even call herself Dame from 1965.


Exhibition
Fourty years after her death there is once again a large exhibition of her work. It shows in the Kröller Muller museum in The Netherlands and this is quite fitting. Here was also her last overview-exhibition in 1966.

The Kröller Muller museum worked together with the Tate Britain in London and  Arp Museum Banhof Rolandsech in Remagen, Germany for this new exhibition.

The Kröller Muller museum already has quite a few of her sculptings, that were carefully selected by Barbara Hepworth herself. She said that she was convinced that there was no better place for her work than the garden of this museum. 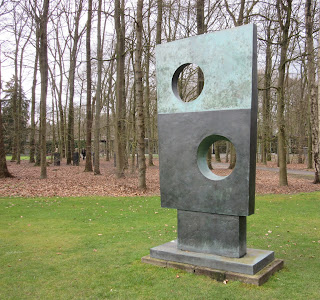 For this exhibition Barbara Hepworth, sculpture for a modern world, about seventy of her works have been brought together, along with about thirty of contemporary artists like Henry Moore, Ben Nicholson and Jacob Epstein.

But there is more to see than just her sculpting; there are also photographs from her own archive, drawings, designs for fabric etc.
I visited this exhibition last Wednesday and I was very impressed. I only really knew her works from pictures, but seeing them in reality shows how beautiful they are. I did want to touch them, and feel the contrast between rough and smooth for example. Of course I could not do that, but I was tempted! 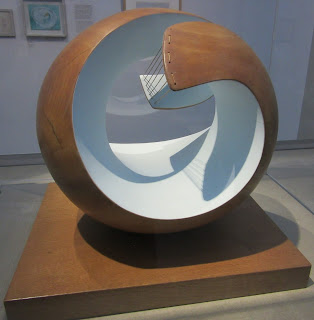 This exhibition showed last year at the Tate museum in London, and the English press was not always positive. There was not enough daylight and why was there so much emphasis on all the other people? Now it looked like Barbara Hepworth never did anything on her own, just followed the men in her life.

This is, as far as I am concerned, not really fair. An artist never works alone or on an island and it is logical the people around an artist influence his or her work, especially if that artist is married to another artist.
I though the works were shown in perfect light, but of course part of them were shown outside, so there is no problem with daylight in that regard. J 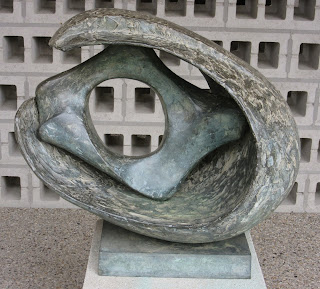 I loved the many photographs from the private-archives that show how she worked. Very special were also the other artwork she made, like her drawings and fabric-designs.

In short, I loved this beautiful exhibition, and if you want to catch Barbara Hepworth, sculpture for a modern world, you have to be quick, it only shows here in The Netherlands until April 17th. Perhaps the next stop is Germany?
art inspiration museum photography