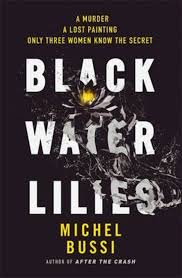 Once there were three women in the village. One was mean, the second was a liar and the third only thought about herself.

This is how the literary thriller Black waterlilies by the French author Michel Bussi begins.

I never heard of him, but I liked the beginning so much I took the gamble and bought the book. I did not regret this, I finished it in one afternoon, I just could not put it down.

The story is set in the village of Giverny, where Claude Monet lived the second half of his life.

A man is found in the river, murdered. The young inspector Lauranç Sérénac leads the investigation. He is a bit flamboyant and falls in love with the teacher of the villageschool. Only problem is, she is part of the investigation.

The murdered man was a Monet-lover, whose biggest wish was to one day own a Monet of his own. He also was a man who had multiple loveaffaires in the past years. The policeinvestigations can go into different directions, was it about an art-theft, was it a jealous husband?

And then it comes to light that a young boy drowned in the same way many years ago and that old crimes have long shadows.

In the meantime there is an old woman who sees everything, a young woman who is implicated and a young girl who only wants to paint. She wants to paint the waterlilies of Monet, only in her own way. Each knows a part of the puzzle, but how will they come together?

The different elements of this murdercase are all connected and this is very well written. The paintings by Monet play a large part. Is it possible that somewhere in the village there is an unknown Monet? Perhaps even one with black waterlilies, by the man who never used black?

Or must the investigation go in an completely different direction and must the police focus on all the children in the village?

Black waterlilies is a very good thriller. I loved the interactions between Sérénac and his sergeant. The parts about Monet are interesting and give us a lot of information, but it never takes away from the story.

In the end, when it all comes together, you will curse yourself for not realizing it sooner, despite the fact that some things seemed a bit odd.

A very good book and I really recommend it to everyone who loves a good mystery and does not mind a little Monet in the mix!