The birds and other stories, Daphne du Maurier 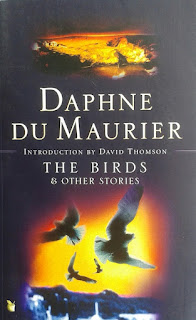 When  was young I once saw the film The birds and thought it was creepy, but then I did not know it was based on a short story by Daphne du Maurier.

Now I want to read more Du Maurier (beside Rebecca) and The birds was the first book I picked up.
And I must say, I really liked it.

The birds
This was so much better than the film! Nat, a farm hand who has seen a lot during the war, sees how the birds are acting strange. He does not trust the situation and tries to keep his family safe. The only problem is, when the whole country is under attack of the birds, who will come to help them?

Monte Verità
This was the story I did not care for very much. It is about two friends who go rock-climbing when they are young and lose touch over the years. One of them gets married, but there is something strange about his wife. And when they go climbing together near Monte Verità, she disappears.

The apple tree
A man was married to a horrible wife (really, she was a nag and a bore) but somehow the old appletree in his backyard seems to have taken over the characteristics of his death wife and refuses to let him go.

The little photographer
A marchioness is on vacation in the South of France. She is bored with her life and her marriage and begins an affair with the photographer who lives in the village. For her it is just some fun for the holidays, for him it is much more. And although she takes drastic measures, she will never be free from him.

Kiss me again, stranger
A young man, just dismissed from the army, finds a girl he likes. She works in a cinema and he asks her out. She willingly goes with him, but she has other motives than he has, as he soon finds out.

The old man
Where an old man takes drastic actions to ensure a peaceful old day for him and his wife.

As you can see, there are six stories in this book and four of them are good, one is okay and one I did not like very much.

Monte Verità was just too weird and to unbelievable for me and I did not care very much for the subject. It may sound strange that I found this story unbelievable, but I accept a ghoststory with an appletree.

For me the difference is in the idea that with the appletree you do not know if it is real, or all in the mind of the husband. And the birds are weird and acting strangely, but perhaps it could happen in reality, we do not know. In the others stories you have normal people doing strange, or bad things, but all within the limits of possibility. I do not know if I am explaining it well, and I hope it makes some sense! :-)

These stories are excellent, I like how Daphne du Maurier can describe atmosphere, in just a few sentences she can give a scene or a situation. You even like the people who are doing wrong, like in The little photographer.

So, if you want to read more Daphne du Maurier, I can really recommend her short stories as well!
books