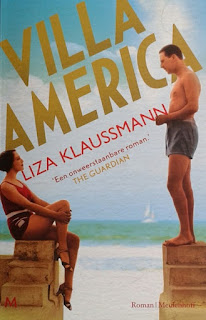 Sometimes you need to read several pages of a novel before you begin to ‘feel the story’. In other cases, the novel grips you from page one and does not let go.

Villa America is one of those books that will suck you in. It begins with the childhood of the sad little Gerald, who grows up in a very unloving and coldhearted family.

When he gets older he meets Sara and with her he feels he can be himself. Luckily, she feels the same way and they marry. Soon they move from New York to France, like so many Americans did after WWI. Life was cheaper here and more things were possible.

Sara and Gerald Murphy do not stay in Paris, but buy a villa at the French Rivièra, where nobody stayed during the Summer in those days (it was where the rich of Europe spent their Winters) In their villa their artistic and literary friends came to visit frequently and many parties were held.

Yet slowly little tears in the fabric of their marriage begin to show and after a couple of years their tight circle of friends is scattered all over. The beautiful Summers in Villa America are definately over.

Sara and Gerald Murphy are historical characters. Sara was a good hostess and Gerald a cubistic painter. And for some years these people were the centre of the so called Lost Generation. They were friends with everybody, Scott and Zelda Fitzgerald, Pablo Picasso, Hadley and Ernest Hemingway and many more.

Their parties were famous, their hospitality and kindness legendary. Sometimes it is said that they made the French Rivièra to the place it is now, a place where famous people come to be seen.

Writing a historical novel based on real people can go terribly wrong if the author somehow misses the right tone or the voices of the characters. This is not the case here, in this novel the things we do not know and cannot know are filled in with the imagination of the writer and this is done very well. These extra’s form a good addition without any false note.

In Villa America the people come to life and the reader is right in the middle of it. You drink cocktails with Zelda, talk to Hemingway and walk on the beach with Sara on a warm Summer afternoon.

Liza Klaussmann wrote a novel that brings these people to life. Each one of them has their own voice and this is done very well. A large part of the novel is told by either Sara or Gerald, although sometimes you get another perspective. This never takes away from the story and it is done very fluently.
I enjoyed how at the end, when Sara and Gerald do not live in Villa America anymore due to tragic circumstances, the story is told by the letters the friends write to eachother.

One of the characters in the novel, Owen, is made up by Liza Klaussmann. She did this to give an outsiders perspective to the group of friends and also to make the doubts Gerald had about his sexuality clearer. Introducing a character like this can also go very wrong, but I thought it was done beautifully. I loved the scenes with Owen in the book and I thought his story was heartbreaking. For me he was as real as the other people in the book.

Somehow I often end up with Hemingway, the lost generation in Paris and the rest. I was really glad I discovered Villa America. I even put the book away at a certain point because I was afraid I would finish it too soon and I was not prepared to say goodbye already to Sara and Gerald and their friends.

Villa America is a great book for everyone who is interested in a beautifully written historical novel about an interesting period in history, the lost generation or the Jazz Age or just a good story about love and the impossibilities of some choices.