Impressions of the Impressionists

July 12, 2016
Musée de l’Orangerie
It cannot be a secret that I am a fan of the Impressionists. Last May when I was in Paris I finally visited the Musée de l’Orangerie. In this former greenhouse in the Tuileries gardens (it was used to store the orange trees for the winter) is now a museum that houses something magnificent: eight large panels painted by Claude Monet with waterlilies from his garden in Giverny. 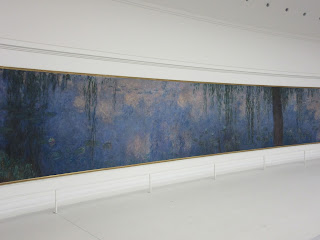 He started painting them when WWI broke out and offered them to the State as a symbol of peace on Armstice day 1918. His friend Georges Clemenceau helped him with this gesture.

Claude Monet was not always happy with his work and repainted many panels, even destroyed some. He also thought hard about the best place and way for the panels to be exhibited. It was not until 1926 that it was all finished and completed in the museum. The museum opened in 1927, but unfortunately Claude Monet had died just a couple of months before. 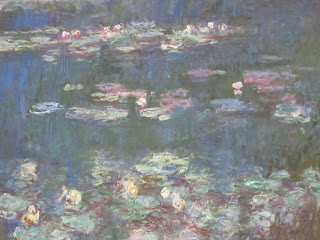 In total there are eight panels, with a height of 1.97 meters. Their lengths vary, but in total they come to almost 100 meters.

The panels hang in two oval halls, forming an symbol of eternity. There is a filtered natural light that could not have been more beautiful. 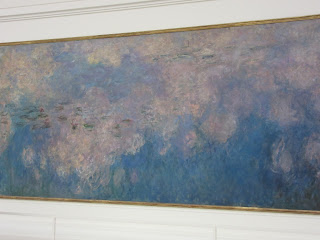 The Waterlilies are breathtaking. The colors are amazing and there are so many details, while at the same time you feel a sense of peace and tranquility.

If you like the Impressionists, you really must see the Waterlilies. In 1952 André Masson called these the Sistine chapel of Impressionism and this is well deserved. 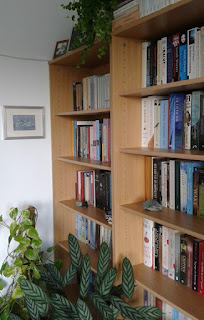 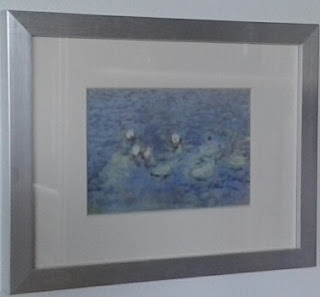 Of course, I had to buy a little piece of the Waterlilies for myself. This now hangs on my wall in my living room and every time I look at it, I feel happy. 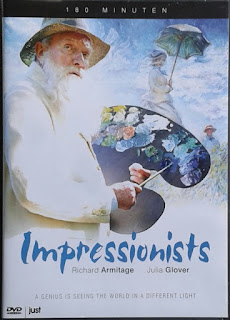 It is a three hours long miniseries and it begins when a journalist comes to Claude Monet in 1920 to ask him about his past.

Monet remembers the time when he first came to Paris as a beginning artist and met Bazile and Renoir who became his friends. Together they would try out new things, like paint in the open air, or finish a painting in one day.

Monet met Camille, but when he married her, his family disinherited him. It would take a lot of time and difficulties before these painters would become successful.

We do not just follow Monet, but also Renoir, Bazile, Manet, Degas and Cézanne.
It shows wonderfully their different characters but also their differences in opinion about art and how they painted.

Visually this series is stunning. Light and color play a huge part and often the paintings are used in the movie, this is done in a very beautiful manner, the paintings really come to life.

Of course not everybody and everything can be named and there are painters missing, but the historical background of the stories is sound. Documents and letters are used and in everything you see the makers did their research.

Richard Armitage (Spooks, North and South) as the young Monet and Aden Gillet (The house of Eliott) as Degas are magnificent, but the others are equally good. I should not have to say this, it is a British series after all J

In short, The Impressionists is an amazing series for everybody who loves British series and 19th century art. 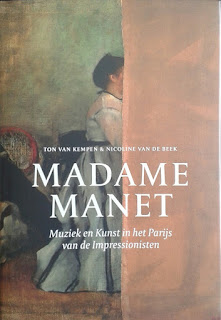 Madame Manet
When I visited the French modernists art exhibition a couple of weeks ago, I saw this book in the Museum shop. It is a Dutch book (no English version available I am afraid), and it is an imaginary interview with the widow of Édouard Manet. He was married to the Dutch pianist Suzanne Leenhoff.

Manet was not really an Impressionist, but he paved the way for the Impressionists and he was friends with many of them. In this book Suzanne Manet is walking down memory lane while she talks to a journalist about her life and all the people she met.

It is a beautiful book, printed on smooth paper with amazing photographs and images of paintings on each page. It was lovely to read and although the tale itself was fiction, the facts and historical events that were mentions are all true.

This book also gave me a new appreciation of Édouard Manet’s work and I am very happy to have it on my shelves!
art books film/television France history inspiration museum Paris personal travel