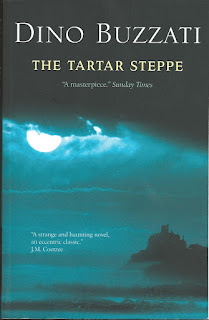 Giovanni Drogo has just graduated from the military academy. His first post is at the fort Bastiani on the north border. He travels there and has high hopes, but when he arrives he realizes this commission is not worth a lot.

The only thing the sentries do is check the border in case the people from the north, the Tartars as they are called, will attack.

Drogo wants to leave immediately, but is persuaded to stay a few months. And soon the military routine makes sure he gets used to the uneventful live at the fort and the way time slips away from him.

Almost without noticing Drogo stays in the fort for the rest of his life and when the Tartars finally come, Drogo will have to fight a completely different enemy.

Dino Buzzati lived from 1906 to 1972. He became journalist for the Corriere della Sera in Milano when he was 22 years old and worked here all his life. He was not only a journalist, but also wrote short stories, plays, poetry and novels. The Tartar steppe is his most famous novel and it was published in 1945.

The book is sometimes compared with the works of French philosopher Albert Camus, because in both cases people are not capable of giving meaning to their life and cling to senseless routines to give them the illusion of purpose.

Giovanni Drogo is a young man with ideals. When he graduates, he hopes for a successful career and he is happy his first commission is at such an important fort. He is disappointed when he comes there and finds out the fort is not important at all.

Still, he gets used to it very fast and when he is on leave and goes to town, he does not even like it there anymore. Together with the other soldiers he waits for the enemy and even hopes the enemy will come, because then they will know they did not spend their time in the fort Bastiani for nothing.

The Tartar steppe is a strange book in some respects, you do not know when or where it is set. It may be the 19th century with the talk of horses and carriages, but it never becomes completely clear. Normally, this would irritate me, but in this case it did not bother me, it is part of the story.
The story is a fascinating one, and you slowly get sucked into it, just like Drogo is sucked into the life in the fort.

Despite the fact they have never seen an enemy, military routines are all important, even if this leads to soldiers losing their lives. Because if you let protocol slip, you might as well let the entire fort slip, because then you will know for certain it has no meaning.

I think it is no wonder this book was published in 1945, after a war when so many people tried to hang to things that had no longer any meaning, just because they could not confess it  all had become useless.

The Tartar steppe is a beautiful story and it is worth reading.