Those who leave and those who stay, Elena Ferrante 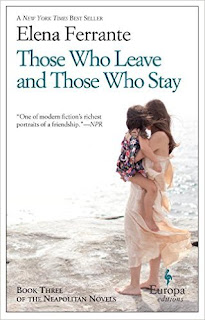 Lina
Lina lives with Enzo and works in Bruno’s meat-factory. Her position here is not an easy one, her character does not lend itself for compromise and she is not capable of being nice for the sake of being nice.

Almost against her own will she gets involved with the communist parties attempt to change the horrible working-conditions for the people who work at the factory.

You cannot help but notice that the communists who want action, are usually from the middle and higher classes, who joined up to show how much they loathe their own families and who now try to tell the real workers what needs to be done. This is exactly what Lina has against them.

She asks too much of herself and her health is suffering, but then the situation changes. She and Enzo have studied the new computer-techniques and they can get a new job, with better pay and a better future. At the same time there is also somebody from the past who shows interest in Lina and what she can do.

Elena
Elena has written her book and this has become quite a succes. She marries Pietro and it is as if his family comes from a completely different planet than  her own.

She tries to write and dabbles a little in journalism, but this is more an exercise in writing than that she really knows what she is writing about. Her new novel never gets past a few notes and she is all too happy to be distracted by her marriage and her children.

Pietro is in a difficult situation. Despite his modern views, he is actually a very old-fashioned man and he does not need or want Elena’s point of view. He is also quarreling with his students who want change at the university and despise his way of teaching. All this causes a lot of tension between Pietro and Elena

Elena is constantly trying to get out of the old neighborhood. She does this literally by moving to Florence and copies the fashion, hair, books etc from her family-in-law. But that does not really help, she never arrives at the level she wants to be, her civilization is nothing but a thin layer and it never becomes something she owns.

Hard to review
It took me quite a while to write this review, because I do not really know what to think of this book.
I come to the weird conclusion that I like Elena Ferrante better while I am reading her, than after I finished the book.

The book is written well and you do want to read to the last page, but somehow it did not make the impact that the first book My brilliant friend did make.

This third book is not my favorite, but that is also because I do not really like the time it is set. I have little sympathy for the activists and feminists of those days who honestly sought change in the beginning, but all too soon became so fanatic that there was no reasoning left.

I do not like Elena, I just want to kick her. I feel she is never honest. She just goes from here to there and back and just complains and never makes an honest connection to something. She never stands for anything. And when she does finally make a choice, you can spot from a mile this will not make her happy, as the person she runs away with has shown himself as not really reliable.

Lina stays in Napoli and even returns to the old neighborhood. She even has Michele Solera, her old enemy dancing to her tune, but the question is who is manipulating who?
Lina is bitter, but she is honest. She grabs life by the throat and does not back down. She has difficulties that Elena cannot phantom, but she perseveres. She is not a nice or a kind woman, but I admire her tenacity.

Why are these two women friends? Habit, old loyalties? They do not even seem to like eachother very much, but at the same time they do ask eachother for help when the need is there.
I do not really understand their relationship, but I am curious to see how this relationship will continue and what will happen next.

The English translation of the fourth book is out already, but I will have to wait until October, when the Dutch translation will be published. I am looking forward to it, despite the fact that I did have some reserves with this book.