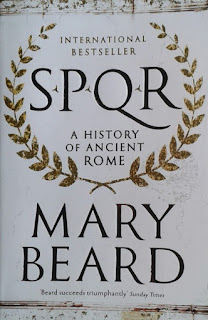 We all known the story of Rome; the small village on the hills near the river Tiber that grew into a huge Empire. Sometimes we think that maybe we can see the ending of the Roman Empire in its beginning, but of course there was never a plan behind the forming of the empire.
We are constantly fascinated by Rome, and we know their culture, philosophy and politics influence us until today. Thousands of books have been written about Rome, but can a new book give us new information?

Yes, fortunately, it can. SPQR by Mary Beard does nog only tell us the well-known story of Rome, but does this with new insights. She does not only look at the events in Rome, but also how the Romans described these and what that says about the Romans. Just as the way we look at Rome tells something about how we see ourselves.

The myths the Romans told about their beginnings are looked at, but also questions are answered like why Caesar was murdered, why Cicero’s court cases still fascinate us and how the Romans thought about marriage, the state, religion and possessions.

What did the normal Romans notice when a new emperor took the reins? We have classified them in ‘good’ and ‘bad’ emperors, but is this correct and did the Romans also see them like that?

Mary Beard uses not only her vast knowledge of Roman history, but also new archaeological finds and insights to tell a new part of the history of Rome. Not just the great men and their politics, but also of the common Roman (as far as possible).

I love how she can write so easily that it feels as if she is talking to you, explaining things and showing you a shard or a tombstone to underline an argument.

The book is 536 pages long, but it never bores for a moment and does give you new insights. This makes SPQR a really remarkable and interesting book, I absolutely loved it.