November 22, 2016
These past weeks I have been watching a few series on DVD about president Kennedy and Jackie Kennedy in particular.

Of course, there are always (minor) errors in films or series about historical events or real people, nothing is ever perfect, but the ones I saw were quite good on the whole. Well, with one exception. 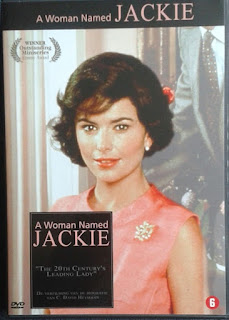 The first miniseries I saw was A woman named Jackie (1991). This has three episodes each lasting 1 1/2 hours. It begins when Jackie Bouvier is still a young girl and her parent's marriage deteriorates. She goes to college and becomes a journalist and then meets a young politician, Jack Kennedy. She marries him, he becomes president and in 1963 he was shot.

A couple of years after his death, Jackie married Aristotle Onassis, only this was in the end not a happy match. After he died, she returned to journalism.

I loved this series because it spans almost her whole life and it gave some insight in why she married Onassis (something I never really understood). I thought the casting was quite good, Roma Downey gave the adult Jackie the right amount of class and Stephen Collins had JFK's boyish charm and played him very well. My only complaint is that the ending is a little abrupt.

The second series I saw was the excellent Kennedy (1983), with Martin Sheen as president Jack Kennedy.
This is a great series. Martin Sheen is the best Kennedy I have ever seen. (funnily enough, when I think about JFK, I think about Martin Sheen playing JFK, not the real JFK)
This miniseries focusses on his time as president, from the Bay of Pigs invasion, the civil rightsmovement, the Cuban missile crisis until the end in Dallas.

Despite the fact there is a lot of politics in this series, it never stops to be interesting and you still get a lot of information about their private lives. I loved how much attention they paid to details.

I loved how Bobby Kennedy (John Shae) tried to get a grip on the FBI that was run by the scary Edgar J. Hoover who wanted to follow his own path. Bobby wanted to prosecute organised crime and promote civil rights, but Hoover was more interested in the president's sex-life.

Blair Brown was an really great Jackie Kennedy, and the rest of the supporting cast was also very good! 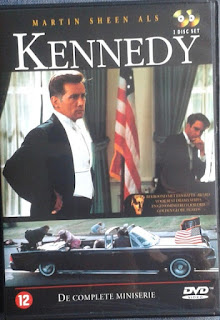 Both these series were good, but I am afraid I was not that happy with Jackie, Ethel and Joan, women of Camelot (2001). This series tells the story of the women who were married to the Kennedy brothers. Jackie was married to Jack, Ethel to Bobby and Joan to Ted.

The casting here is horrible, I have never seen such terrible casting in my life. Daniel Hugh Kelly is ridiculous as JFK, Ethel is made completely unlikable, and Sarah Lafleur as Marilyn Monroe was so bad that is was insulting.

It was bad acting and bad storytelling all around, so on the whole, I really do not recommend this film! 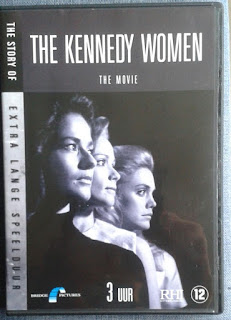