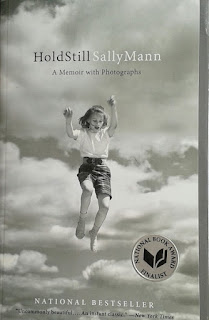 When you take a photograph, you are trying to keep a memory of the moment, of the past. The paradox is that a photographs does not keep a perfect memory, it changes every time you look at the photograph.

Sally Mann is one of the most famous contemporary photographers. She was born in 1951 in Virginia to parents who were faily unconventional in the way they brought up their three children.

When she was twenty, she married Larry Mann, and until today they are happily married and live on their farm in Virginia.

When she was at school, Sally became interested in photography. At first she mainly photographed her family and her children. When a photobook with familyphoto's came out in the ninetees, there was a huge controversy, since a lot of the time her little children wore no clothes.

In those days people saw childabuse everywhere and she was almost charged with making child-pornography. It never came to that, but these events did have a huge impact on their family.

Sally Mann tells us about this time, but also reveals her family history, which almosts reads like a Southern gothic-novel, so many weird people and even weirder events!

She has an enormous love for the landscape in the South, but does not shy away from the history here. Some of this is part of her own history, since she grew up here in the fifties and sixties and the racial lines were clearly drawn.

Sally Mann looks the past unflinching in the eyes, even the uncomfortable parts.
Hold still is not a chronological memoires, but it is almost thematic. It is a really interesting and fascinating story about photography, the South, families, secrets and the question if photography is art or not.
I loved reading it.