January 03, 2017
I love Agatha Christie and of course, I love the films and series made of her books. For me, there is no better Hercule Poirot than David Suchet and I am very happy I have the whole series on DVD.

When I was young two films were often braodcasted on Dutch television, and I must have watched them several times. These were Evil under the sun (1982) and Death on the Nile (1978), both films after a book by Agatha Christie and with Peter Ustinov as Hercule Poirot.

Peter Ustinov is of course an iconic actor, but to be honest he plays a better Peter Ustinov than he plays Hercule Poirot. Still, the films are absolutely great fun to watch. I have them on DVD as well and during Christmas day, I had a quiet afternoon and I watched both of them. 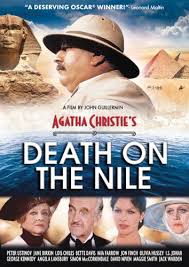 Death on the Nile (1978)
Linnet is a rich young woman, who marries the fiancé of her best friend. They go to Egypt on their honeymoon, but are constantly stalked by the ex-best friend. During a cruise on the Nile Linnet gets murdered, but everybody seems to have an alibi. Luckily, Poirot is also on board and he can unravel all the clues and find the real murderer.

The plot of this book is very good and luckily they did not alter much. Of course not all characters from the book are in the film, but that is not a bad thing.
Great filmstars are in this film, David Niven, Bette Davis, Maggie Smith, Mia Farrow and Angela Lansbury are a few of the well-known names who participated.

The murder itself is ingenuous and is filmed very well, with all the different possibilities of who might have done it.

Yes, they messed up the different monuments along the Nile, but I could not be bothered about that.
It has a great cast, beautiful costumes and the scenery is magnificent. 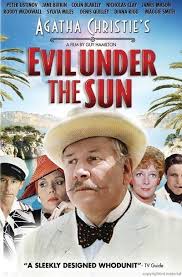 Evil under the sun (1982)
Arlena Stuart is an actress who now married an English gentleman. With her new family she goes on vacation to an island, only there Arlena is murdered. Arlena did not take her weddingvows very serious and her new lover is also in the hotel, but he has an alibi. It takes Hercule Poirot all his wits to unravel the clues of what happened when exactly.

For this film they moved the hotel from the English coast to somewhere in the south, near Mallorca or something. A good choice! They changed a lot of the characters as well and also left out a side-plot that actually makes the story a bit better. (I do not say this often, but in this case it is true).

The mrder itself is a really clever one, and until the last moment, I never guessed who the real murderer was.

Again, so many great names play in this film. Diana Rigg (one of my all-time favorites) plays Arlena, Maggie Smith is the owner of the hotel and Jane Birkin is sublime in her role.

The costumes are outrageous, it is set in the thirties, but the costume-designers went a bit wild. It does not matter, because it all adds to the fun.

And there is a lot of fun, I love the banter between Arlena and Daphne (Diana Rigg and Maggie Smith), especially in the duet 'You're the top', from Cole Porter.

Peter Ustinov will never be my favorite Hercule Poirot, but I hugely enjoyed seeing this films again and I am glad I have them on DVD, since I know I will be watching them again, every time I need something to cheer me up.