February 14, 2017
A few weeks ago I gave a list of books by Agatha Christie that, in my mind, are worth reading or not really worth reading (you can find it here).

I was quite firm when I said that all novels with Tommy and Tuppence in it should be avoided at all cost.

Well, since then I had a little change of heart. I watched the new Miss Marple series (well, not very new but new to me) with Geraldine McEwan als Miss Jane Marple. (a lot of things to be enjoyed in this series, by the way)

In series two one of the episodes is called 'By the pricking of my thumbs'. I did not know this story, and it turned out it is not an original Miss Marple story, but a Tommy and Tuppence story. In the series they changed it around to fit Miss Marpe in it.

And I must admit I liked the story. Tommy and Tuppence are now a middle-aged couple and life is not as fun as it used to be. Tommy is caught up in his work and feels Tuppence should just stay at home, while Tuppence feels left alone and drinks a little too much for her own good.
When Tommy's aunt Ada dies, she leaves Tommy a painting, but this paining turns out to be a clue. Aunt Ada did not just die, she was murdered and another old lady is also in danger, an old lady who told Tuppence a baby was buried behind the fireplace.
Tuppence and Miss Marple form a great team together and find out what really happened.

As I said, I liked the story in the series very much, so I thought I ought to read the book as well, and I did. The Dutch title is not By the pricking of my thumbs, as this Shakespeare-reference would mean very little to most Dutch readers. The Dutch title it 'The doll in the chimney'. 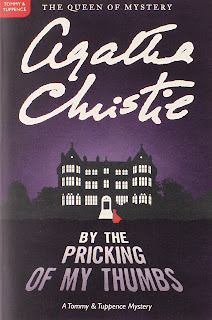 And yes, it was good. The story is perhaps a little implausible, but it was a good read nevertheless. It is of course different than in the series (no Miss Marple and no strange sub-plot with the American soldiers), and I think the book was even better than the television episode.
I have also tried another Tommy and Tuppence novel, The secret adversary, but this was not that good, Agatha Christie is a great writer, but not when she is talking about international conspiracies and spies etc. So I put that one back on the shelf, and perhaps I will finish it later.
books film/television