The story of the lost child, Elena Ferrante 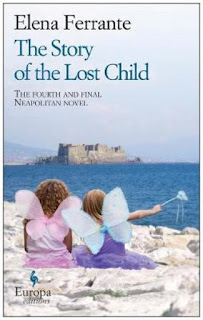 Well, it did take me some time to get into it, but in the end I found this book as good as the first two books of the series and I was relieved about that.

In this last book Elena finally made her choice. She hopes Nino will leave his wife for her, but this never happens. Nino is far too happy to have the best of both worlds and only invests in a relationship if he can get something out of it.

Elena moves back to Napoli and rekindles the friendship with Lila. She also continues to write, but the people in the old neighbourhood are not happy about the way she talks about their secrets. Lila on the other hand has it made. And in the neighbourhood she is seen as an alternative for the Solera family. People come to her to ask her advice and look up to her.

Unfortunately something terrible happens and Lila is left broken. She is now more or less shunned by the people from the neighbourhood, since bad luck can be contagious and Lila never recovers.

This whole series of four books I wondered why Lila and Elena are friends, somehow they never even seem to like eachother.

I do not have much sympathy for Elena, she is too fake and too wrapped up in trying to be better than she is. Lila is also not a nice person, but I can respect the way she looks life straight in the eye.

I did like to read about the history of Italy, and even would have liked to read more at certain points (why so little about the murder of Aldo Moro, why no mention of the murder of Giovanni Falcone for example?).

Although I do seem to like Elena Ferrante better while I read her books than when I finished them, I did enjoy the whole of the series. I was not always interested in the characters or the friendship between Lila and Elena, but I did like the insight in the neighbourhood in Napoli and the changes in Italy.