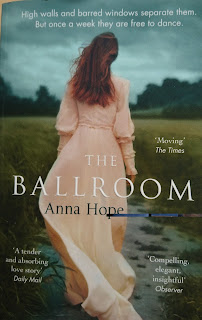 An asylum on the Yorkshire moors. There are over 1000 male patients and about the same amount of female patients. In those days, it is 1911, there were no drugs or therapies or counselling to help you if you had psychiatric problems.

The only treatment was rewards when you behaved well and punishment if you behaved badly.
The staff and the doctors did try their best in their limited ways to look after the patients. There was good food and for the male patients who worked outdoors there was also plenty of fresh air.

And of course there was the music. Hippocrates already thought that music could be beneficial to patients and in this asylum the music was taken seriously. A doctor played music for the patients in the wards and each week on Friday there was a dance in the ballroom. Only the patients who deserved it were admitted here and the patients were eager to go, since it was a welcome break in the boring and monotonous week.

Ella worked in a textile mill. Every day she worked for more than 14 hours, cooped up in a factory. At home there was no kindness since her mother died and Ella is very unhappy with her life. She wants to break free, but if she breaks a window in the factory, she is diagnosed a being mad and ends up in the asylum.

John lost his wife and his child and that made him loose himself. So much that he was seen as unfit to live in the outside world and he was also admitted to the asylum.

Clemency has been a patient at the asylum for a long time, but she is there because being there gives her more freedom than a marriage would. Clemency longs to read and wants to go to university instead of being a wife and mother, but the doctors feel it is this unfeminine obsession with reading that led to these unnatural desires.

Charles Fuller is a mediocre man. He only just passed his medical exams and wishes he had enough talent to be a concert player. Unfortunately, he is now only the bandmaster of the asylum and not even the first medical assistant in the asylum.

Dr. Fuller is very interested in the new ideas of eugenics. This was a wide spread movement in the US and in Europe that if you try to be careful about breeding animals, society should also be careful about breeding people. Many of the scientists, doctors and biologists who were involved in the eugenics movement, thought that it would be best to sterilize unfit people, to make sure they would not spread their unhealthy and unfit heritage.

Dr. Fuller hopes to find a case in the asylum he can write a paper about for the Eugenics conference in London, to impress people like Winston Churchill.

These four people meet in that gloomy asylum in Yorkshire. And while Ella and John dream of being free and John writes letters describing the outside world to Ella, it is doctor Fuller who proves to be the real danger. His own feelings of insecurity and admiration for John (or even more), mix with anger and bitterness and he becomes somebody they should fear.

Anna Hope first wrote Wake, which I really loved, so I was very excited to read this second novel by her.

The ballroom is the story of love in difficult circumstances, of freedom and control, of madness and sanity, of forbidden desires and feelings you are ashamed about. I really liked how we met different people and through their stories we learned more about the workings of an asylum in those days and the society in the beginning of the 20th century.

The psychology of the four different characters was well written and I loved how the story alternates between them.

I also liked how your sympathy shifts, for example, I felt sorry for Dr. Fuller at first, but at the end of the book I wished him a horrible death.

John is a man who I began to love, and I wish the ending could have been a little happier, although it is not exactly an unhappy ending. I also felt very sad for Clemency, although I admired her single-mindedness and how she refused to bend. Dan brought the comic relief, that was sometimes very much needed!

The only thing that bothered me is the fate of Ella, since it was never explained how a simple illiterate girl managed to survive after the asylum and do what she did. I would have loved to read more about that and have it worked out more, since now it was a little unrealistic. But that was the only thing I was not happy about in this very well written and engaging novel.

I read The ballroom with Lark, who also published a review (HERE). Again it was a lot of  fun to discuss the book and the characters while we were reading. A lovely reading project, so thank you Lark, for doing this with me. I hope we will do another one in the future!