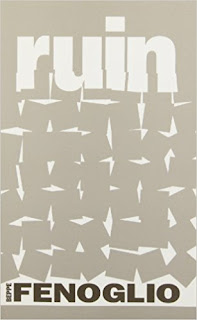 Ruin is the story of Agostino Braida. His family rented him to a farmer as a farm-hand when he was just a little boy. For seven gold pieces and a pair of trousers each Christmas, Agostino works every day of the week without taking a break.

Tobia is the farmer who is hard for his little helper, but also for his wife and children. His dream is to once own his own piece of land and not rent it from a rich man in town. He wants to safe his family from the hardship he endured when he was a child, but in the meantime the situation is almost unbearable.

Beppe Fenoglio describes the countryside around his hometown Alba, and he knows how hard the situation for the farmers and the tenants was. He knows about the heartbreaking poverty and the bitter struggle for the next meal, because he witnessed it.
The farmers work hard on their small properties, never growing enough to life from, but too much to die.

There is no escape from this poverty and almost no hope. The little hope Agostino has every now and then is crushed

In the end Agostino will be alone on the piece of land his parents owned and he will be the last one standing, his whole family has succumbed to poverty and illness.

A lesser writer would make this tale of misery into something sentimental or something laughable.

But not Beppe Fenoglio. His clear way of writing is without embellishments, but that makes it even more powerful. The story of Agostino captures you and does not let go. You cannot escape, just like Agostino cannot escape his fate.

I love the writing of Beppe Fenoglio and for me he is one of the greatest Italian writers of the 20th century. And Ruin is just another example of a wonderful Italian classic.