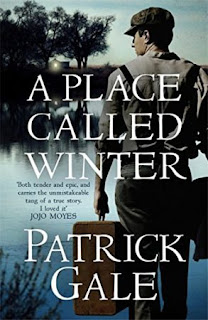 Harry Cane is a lonely little boy. His mother died when his brother Jack was born and their father send them to a boardingschool as soon as possible.

Harry grew up to be a shy and stuttering man. He lead a pleasant, but uneventful life with set routines. Even when he married, nothing much changed.

Until he fell in love. A passionate affair that scared him, but that he also could not turn his back on. Knowing, that if word got out, he and his lover could lose everything and even end up in prison.

Harry Cane had fallen in love with a man and it is a few years before WWI.

When there is a blackmailer, his family wants to prevent a scandal and Harry is forced to leave his wife and move to Canada to become a farmer. In this desolate place he must try to survive the wilderness and the loneliness, overcoming loss and hardship.

I never heard of Patrick Gale before, but I saw a documentary about him a few weeks back and somehow this struck a chord. I wanted to read his books and I was recommended this one, A place called Winter.

And I can tell you I was most certainly not disappointed. Patrick Gale used his own family history for this story, the fact that his own great-grandfather also left his family and moved to Canada. The rest of the story is filled in by the novelist, as a good novelist knows how to do.

The story of Harry is well written. It begins with a heart-breaking scene in an asylum, so you know something terrible has happened. After that, Harry is transferred to a therapeutic community and here we learn about his life in flash backs.

Despite the fact that Harry has to endure a lot, he never loses hope. He draws comfort form the beautiful landscape around him and the fact that despite everything, life is always worth living in the end. That makes this also a very hopeful tale.

I also like how the historical setting is correct, especially the mindset of the people around 1910. Often, modern writers have the tendency to plant modern ideas and sympathies into a historical period, which says more about the writer than about the period the story is set in. But in this case it is done very well and utterly correct.

But knowing your kind of love may land you in prison, does not mean nothing is possible, it does mean you had to be more subtle, careful and creative. But also in that respect there is hope for Harry, and that really pleased me.

Patrick Gale has written an absolutely beautiful book and I am glad I finally discovered him, because now I can add him to my list of favourite writers. I can also tell you I already have many of his other books here on my shelf already, waiting to be read.