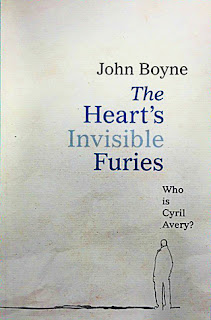 Last Sunday I read this book, and I could not put it down, so I read all 600 pages in one day. But it really is that good.

It is the story of Cyril Avery, who was handed to his adoptive parents by a nun. His biological mother was 16 and not married, a huge scandal in Ireland in 1945. The priest called her a whore in front of everybody, and her parents threw her out.

Cyril had a strange upbringing, his adoptive father Charles tells him all the time he is not a real Avery, and his adoptive mother Maude is a writer who despises her readers (popularity is vulgar).

It all changes when Cyril meets Julian, and from that moment a life-long bond is formed. Julian is outgoing and charming and will grow up chasing every skirt in Dublin. He is everything Cyril is not, and soon Cyril realizes that he feels more for Julian than just friendship. But he also knows he can never tell somebody about these feelings.

Being gay in Ireland in the fifties, sixties of seventies was not easy. It was seen by most people as unnatural and shameful and for most people it was also a crime. As one doctor tells Cyril; 'You cannot be a homosexual, since this does not exist in Ireland'.

He finally moves to Amsterdam where he meets the love of his life and together they move to New York during the eighties, when the AIDS epidemic was at its height.

When Cyril finally comes back to Ireland, he must face the consequenses of the choices he made and he must try to get some peace with himself.

The heart's invisible furies is an amazing book. It condems the hypocrisy of institutes like Church and Politics, but also celebrates how ordinary people can who mercy and love and understanding. And fortunately for Cyril he meets a lot of these people. He has his share of misery and heartbreak, but there is happiness and more family for him than he could ever have hoped for.

I love how this book made me laugh outloud with the sometimes absurd dialogues, but also made me cry at some points. Despite the subject it is not a difficult or depressing book. It is heartwarming, funny and almost epic. I loved it.