Exhibition: The Dutch in Paris 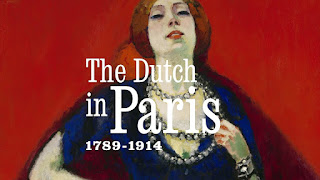 Paris has always been the centre of the artworld and many artists from outside France came to Paris to learn new techniques or be inspired by new ideas. In Paris you had the Academies and the Salon, thé place to get noticed and to sell your work.

Already in the 18th century, Dutch artists came to Paris. Some of them became very succesful, like Ary Scheffer, who came to Paris when he was only sixteen years old, but who never left. He was even succesful at the French court of king Louis Philippe!

And in later years many others came, like Johan Jongkind, Vincent van Gogh and Kees van Dongen and Piet Mondriaan
.
The exhibition The Dutch in Paris 1789-1914, that is shown now in the Van Gogh museum in Amsterdam, shows their work.
It shows how the Dutch artists were inspired by Paris and the busy life in the city, but it also shows how the influence worked both ways.

Johan Jongkind became a friend of Claude Monet and Monet saw how Jongkind painted his skies in loose and swirling paintstrokes, using light colours. This inspired Monet in his Impressionism. And Vincent van Gogh on his turn was influenced by Monet.

Another great example is George Breitner who saw the dansers Edgar Degas painted, and introduced this subject in The Netherlands.
It is beautiful to see in the exhibition who these painters took their inspiration from eachother, in subjects, technique and use of colour.

Not all of the Dutch artists lived in Paris long, but even if they only stayed a short while, their work was very much influenced by the capital of art, Paris.
The exhibition can be seen until January 7th, 2018 at the Van Gogh museum in Amsterdam.
art France history museum Paris The Netherlands