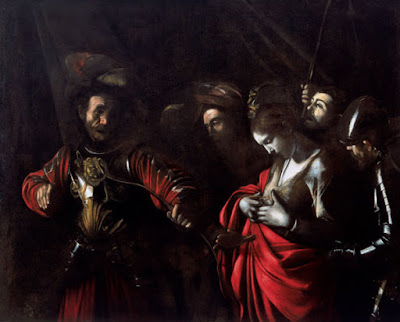 Saint Ursula was said to be on her way to Cologne in Germany with 11.000 virgins, but the Huns caught them and slaughtered all the virgins. The king of the Huns wanted to marry Ursula, but she refused, so he killed her with an arrow.

Caravaggio painted the moment she is hit by the arrow, and the people around her are in shock. Ursula herself is also not believing what just happened to her.

This painting was commissioned by a nobleman Marcantonio Doria, but it ended up in the hands of the Duke Zervellos, a Spanish nobleman who had a palazzo in Napels. This palazzo and the art collection were finally bought by an Italian bank, but you are still allowed to see the artcollection.

The painting is not preserved in a great condition, perhaps something went wrong with the varnish, but it is also possible a restoration attempt went a bit wrong.

But still it is a powerful and wonderful painting to see. Especially since Caravaggio painted himself as one of the soldiers behind St. Ursula, shocked by the events. This somehow seems to forbode his own death just a short time after he finished this painting. 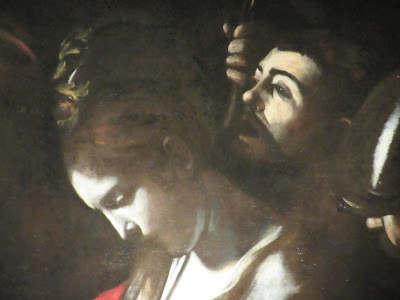