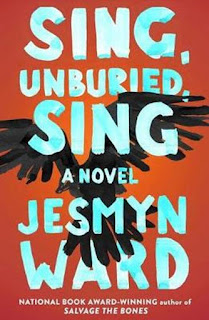 Not a lot has changed for the poor black people in Mississippi, it seems. In Sing, unburied, sing, we learn the story of Jojo and his family.

Jojo is 13 years old and lives with his little sister with their grandparents. His grandfather is Jojo's rolemodel and one day he hopes to become just like Pop.

A big problem is their mother, Leonie, who is not around much, spends her time getting high and when she is around it is clear the children do not mean much to her.

When her white boyfriend and the father of the children, Michael, gets out of prison, Leonie wants to pick him up. She is determined the children should come with her and so they begin on a terrible roadtrip that we all know will not bring any comfort.

A large role in this book is set apart for the Parchman prison in Mississippi. This was founded in 1901 and often black people were sentenced to go there and live and work in harsh and terrible circumstances.

Pop was sentenced to go there in the forties, and now Michael also spend time here.

Another large role is for the ghosts in this story. It took me a while to get used to the very active role these ghosts play, but on the other hand if there is so much injustice, it is no wonder the dead are restless and demand answers from the living.

Jojo has seen more than he should have, but he has his grandfather and we know he has a good chance in life. For Leonie and Michael there are no chances left and although we do understand Leonie has her demons, it is hard to find any sympathy for them.

Sing, unburied, sing is a beautiful book that tells you a little more about the life of black people in Mississippi and also a fascinating part of history. I also have Jesmyn Wards other novel, Salvage the bones on my shelves and I think I will read it very soon.