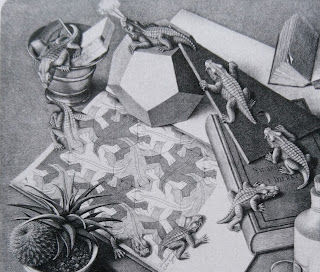 Maurits Escher (1898-1972) is I think one of the best known and most loved Dutch artists of all time.

Many people know his intricate drawings of imaginary worlds, where the persepective is not what it seems to be and when you look close, you see all kinds of things that should not be possible. But of course they are possible in a drawing by Escher.

He was born in 1898 and he was not very good at school, he only excelled at drawing. He went to a technical university to study architecture, but switched to art, which he liked much more.

As he said himself 'I had no interest in building houses, only if I could have built very weird houses'.

He loved travelling from a young age and spend a lot of time in Italy. He even lived there for a long time, with his wife and three sons.
He walked around the countryside to draw the landscap, and the little Italian town on the mountains. In Rome he went outside during the night to draw the empty squares, the belltowers and the courtyards. And then he began combining elements into a new fantasy-landscape and later he added the funny play on perspective. And that is how he made his famous drawings. 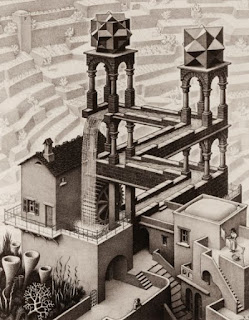 Very funny anecdote, apparently the Rolling Stones wanted his work on an album cover, and Mick Jagger began his letter with 'Dear Maurits'.  Escher declined the commission and said in his letter; 'Please tell Mr. Jagger I am not 'Maurits' to him.'

I saw a beautiful exhibition of the work by Escher in Leeuwarden (his birthplace) and I loved how it showed how his work evolved and changed.
And I like how you can still see the elements of the Italian landscape in all his work, even in his later drawings.
An amazing artist.
art history The Netherlands