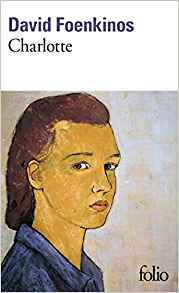 In Germany, in Berlin, a little girl, Charlotte Salomon, was born. Her father was a doctor, her mother died when she was eight, because of influenza. Charlotte has talent for art, and she is able to get into the art academy of Berlin. It is the nineteen thirties and just a few Jews can study there.

In 1938 the family thinks it is too dangerous for Charlotte to stay in Germany and she is send to Nice in the South of France, to live with her grandparents.
When the war breaks out, her grandmother kills herself, and then Charlotte finds out that in the previous years her mother also committed suicide, but also her aunt and several other family members.

She begins to paint a large body of work and hands this over to a medical doctor who was a friend. She told him it was her life's work.

She and her husband were arrested and brought to Auschwitz, where they were probably gassed the very same day.

The suitcase with her work was given by the doctor to her parents, who had survived the war by staying in Amsterdam. They gifted the paintings to the Jewish historical museum in Amsterdam.

French author David Foenkinos became fascinated by her story. In the past year he tried to find her footsteps (sometimes with more results than other times) and wrestled with the material. How should he write about her?
The result is a book with short sentences, as if the writer had to take a pause after eacht sentence. It took me a while to get into that style, but in the end it had the effect as a poem.

Charlotte by David Foenkinos is a beautifully written and fascinating book about an artist who made some beautiful work, despite her short and sad life.