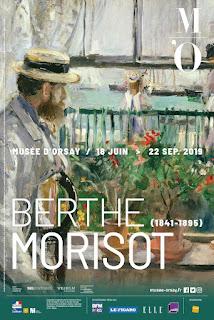 In the Musée d'Orsay in Paris is a beautiful exhibition of works by Berthe Morisot.

Although her name is not widely known nowadays, she was one of the Impressionists alongside Monet, Cézanne and Renoir.

Berthe Morisot was born in 1841 and her parents, although not rich, had enough money to let Berthe and her sister Edma follow drawing classes and to let them paint.

Berthe was doing really well and had work of her at the Salon, where they were well received.

She did however marry Manet's brother, Eugène. This was a marriage between two people who loved eachother. Eugène supported her painting everyway he could.


She died in 1895 and left a beautiful oeuvre, that deserves to be better known than it is today.

I  went to Paris to see this exhibition. I did not know the works of Berthe Morisot and had little idea what I would see, but I loved it very much. I liked how she could give the impression of something with just a few brushstrokes and the way she used colour. I also admired how divers her paintings were, from children to a sea-sight, and all of them equally beautiful.

In short, this exhibition (that has also been shown in Dallas, Québec and Philadelphia) is worth going to Paris for, if you have the chance. :-)
I feel very privilegded that I had this opportunity and get to know a new painter (new to me).

The exhibition can be seen in the Musée d'Orsay in Paris until September 22nd 2019. Admission to the museum is 11 euro's.
art France history museum Paris