January 14, 2020
The more I see of Dutch painter Jan Sluijters, the more I like his work. He was born in 1881 in the city of 's Hertogenbosch. He studied art and in 1904 he won the Prix de Rome, a stipendium to study art in Rome.

His went to Spain, Italy and Paris and his work was influenced by fauvism. He became more and more famous, he had many exhibitions and was rewarded with several honours, even one from queen Juliana of The Netherlands in 1952. In 1957 he died.

When I was in 's Hertogenbosch last week for an exhibition about Vincent van Gogh, I also saw this work by Jan Sluijters, called Geraniums (1912)

Just two geraniums sitting on the balcony ledge, in a street in Amsterdam (where he lived at that time).
I love how this paining invokes those warm Summer evenings, when the worst heat is over, and you open the balcony doors and the windows to let a bit of fresh air in. 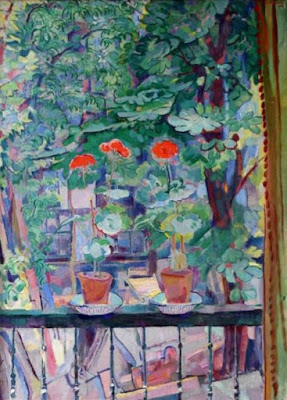