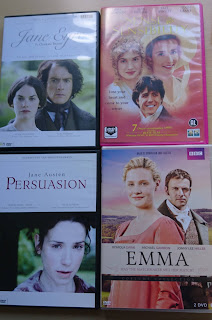 Buying the new versions of the Classics by Jane Austen and Charlotte and Emily Bronte, made me want to dive into the classics a bit more, by watching a few of the adaptations for film and television.
I have the 1995 version of Sense and Sensibility, with Emma Thompson, Kate Winslet, Alan Rickman and Hugh Grant. I love this version, that has an intelligent script that is mainly faithful to the original book, and the changes that were made, are good ones, that work for the film. Emma Thompson is perhaps a bit too long in the tooth to play 19 yo Elinor (she was 36 at that point), it is still very well done.
I knew Jane Eyre, the version with Michael Fassbender and Mia Wasikowska. This version here is a different one, it is the mini-series from 2006 with Toby Stephen and Ruth Wilson. I am curious to see how I will like this one.
There are so many version of Emma I could hardly pick one, so I finally settled on this one. This is also a mini-series and it was made in 2009. It has Romola Garai as Emma and Jonny Lee Miller as Mr. Knightley. I am not sure about that last one, since I can never see Jonny Lee Miller as anybody but Sick-boy (Trainspotting).
And the last one here is Persuasion, from a novel by Jane Austen I only just read for the first time (loved it, by the way). I was not sure if I would see the film first or read the book, but usually, reading the book first works the best.
After I read the book, I watched this adaptation and although the first hour is quite alright, they completely mess it up in the last 30 minutes. I ended up hating it, and that was a shame, since I was really looking forward to it.
It was made in 2007 and has some great actors, like Sally Hawkins, Alice Krige, Stella Gonet and Anthony Steward Head. They all did a decent job, I liked Anthony Head as the snobbish and vain Sir Walter very much and Rupert Penry Jones is a good Captain Wentworth. Sally Hawkins was not my Anne, but I was quite upset with the changes they made to the story. It ended up being ridiculous.
Really a shame, since I was looking forward to it.
books film/television