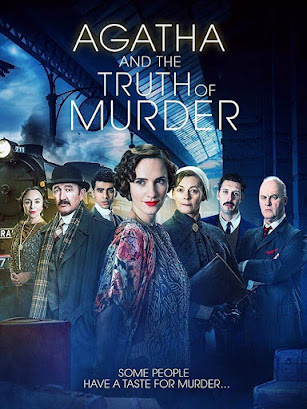 In 1926 Agatha Christie was a beloved and very popular writer. She also had a husband who wanted to divorce her so he could marry his mistress.
During that time, Agatha Christie disappeared for 11 days. The whole country was looking for her and the entire policeforce was using all in their power to find her.
After 11 days, Agatha Christie resurfaced again, and refused to tell what had happened. There has been a lot of speculation.
This film, Agatha and the truth of murder takes a whole new spin on the disappearance of Mrs. Christie. In this film, Agatha has not only the problem of her husband wanting a divorce, she also has writer's block. She even goes to Sir Arthur Conan Doyle for advice (hilarious scene). And then a woman comes to Agatha and asks for her help. Her lover, a nurse, was murdered a couple of years ago and nobody was arrested.
Agatha decides to go undercover and re-examine this murder, and she if she can find out who did it. After all, she is used to solving mysteries. But of course, in real life, things are not always as easy as in a book.
This films is made without the consent of the Agatha Christie family, who are very fierce in protecting the legacy of Agatha Christie.
I do not think it is a true account of events, but I also think the producters did not want to make a true account, this is just a fun spin on the situation. And this is a succes. I liked this film very much and I enjoyed watching it.
Ruth Bradley makes a good Agatha Christie and there are also other actors like Pippa Haywood and Tim McInnery.
Just good fun and entertaining.
film/television