August 11, 2020
I live in the city of Almere, and this was built in 1975 on reclaimed land. The Dutch reclaimed it from the sea. During prehistorical times, this was land, as the bones of mammoths found here, tell us.

But during the Roman times and the Middle Ages, this was a sea, refered to as Al-mere.

In 1918 the Dutch government decided that the country needed more land for agriculture and four new polders were made.

A polder is land reclaimed from water. In a very easy and quick way: you build a dyke around it, pump out the water and there you have a polder. Of course, you need a system of mills around it to pump to keep the water out.

The Dutch have done this since the Middle Ages.

After WWII, the last two large polders were made, the Eastern and the Southern Flevopolders. These were also meant to be largely agricultural land, but it soon turned out the booming polulation needed somewhere to live, and two large cities were built. In 1967 Lelystad and in 1975 Almere. 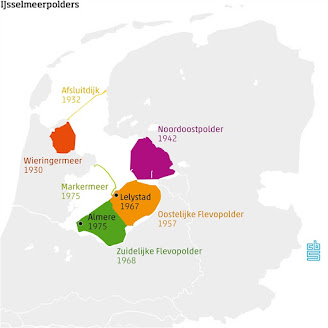 Nowadays, Almere has over 200.000 inhabitants, and it is the 8th largest city of The Netherlands.

It is not a cosy and old town full of atmosphere (not like the historical Dutch towns), but it does have a lot of green and lots of interesting architecture. Fun fact, the city was designed to keep cars, bicycles and public transport apart, each group has their own streets and lanes. If you are taking driving lessons here, you need to take your driving examen in another city, since the traffic here is not like in other places.