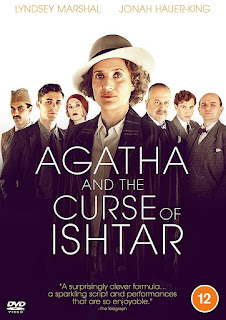 In 1928 Agatha Christie is at a bit of a loss. Her divorce came through and she wants to write something else than a detective novel. Perhaps she even wants to write a romance-novel.

Friends of her, Katherine and Leonard Woolley ask her to come to their archological dig in Iraq, where she can do research and take her mind of things.

Agatha travels to the dig, but the first person she finds has been shot. Agatha takes the man to a doctor and it turns out he is also a friend of the Woolleys and works at their dig as an archologist. His name is Max Mallowan and he was looking for clues how his friend died a couple of days before.

When Agatha and Max arrive at the house of the Wooleys, a pet monkey seems to be murdered, there is a thief who steals the ancient artefacts and there is more murder. Is it the curse of the Goddess Ishtar, or is it something more modern?

Can Agatha, with the help of Max, find the solution to this mystery?

I really enjoyed this film. It is lighthearted and funny. I loved the atmosphere of Iraq and the archeological dig, and I especially enjoyed the banter between Agatha and Max. Max, played by Jonah Hauer-King, is charming and I also thought Lyndsey Marshal was an excellent Agatha.

Agatha and the curse of Ishtar is another film about Agatha Christie, mixing a few events from her life with a story that could have happened (but did not). The first film I reviewed was Agatha and the truth of murder (here)

Yes Agatha Christie did travel to Iraq and met Max Mallowan there, an archologist 12 years younger than she was. She was 39 when they met and he was 26, and this explains why she was a bit hesitant at first, but they got married in 1930 and would be married for 46 years until Agatha Christie's death in 1976. There was no murder mystery when they met, but the film is not a biograhy, and does not pretent to be one.

Instead, just watch it for the charming romance, the great atmoshpere and the murder mystery that that has very funny moments.