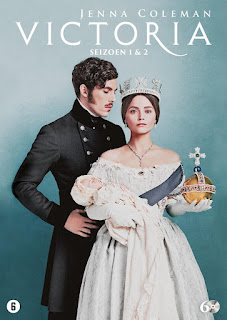 I wanted to know more about queen Victoria, so I made a little project for myself. I read a biography, and I saw several films and I finally took the time to watch the entire series.

ITV made a beautiful series Victoria, with Jenna Coleman as Victoria and Tom Hughes as Albert. Also Rufus Sewell is Lord Melbourne, and he is utterly charming and amazing. I actually wanted to marry him myself!

The series is gorgeous to look at, but the historical facts are taken not just with a pinch of salt, but a whole barrel. For example: Victoria and Lord Melbourne did not want to get married together, Victoria did not have a terrible relationship with her half-sister Feodora and her maid Skerrett died when she was 90 and never married.

Is it despite the historical problems good to watch? Yes it is, as long as you realize it has some problems and you do not take it as the Gospel.

There are also things that are correct, like the fact that Buckingham Palace was absolutey filfhty and was run in a terribly impratical way. Also, Victoria and Albert did have some horrible rows.

I really enjoyed myself with the series. The clothes and the details are absolutely amazing, Jenna Coleman is as always a joy to watch and I quite liked Tom Hughes as Albert. It is a shame there are only three series, I would have liked to see the whole of Victoria's life. Now, we end just after the Great Exhibition, a great succes for Albert, but with a terrible cost to his health. Quite a cliffhanger, but there will be no fourth series as I understand.