The story of a new name, Elena Ferrante 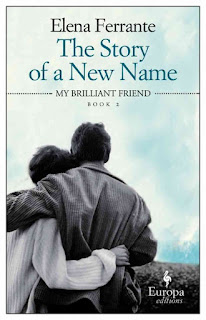 Being friends and staying friends can be hard sometimes, especially when the circumstances between friends can differ. Feelings of jealousy and guilt, needing eachother and pushing the other away can all become part of the friendship, as it is in the case of Elena and Lila

The story of a new name picks up at the exact point where My brilliant friend ended and after only a few pages all the names are familiar again.
The brilliant Lila is married to Stefano, but her marriage will not be the escape she so desperately hoped for. She had hoped to get away from her childhood that broke all her ambitions and possibilities.

Only where fiancé Stefano was willing to please Lila, the husband Stefano wants Lila to act like his wife and to obey all the rules that come with her new last name.

The marriage is doomed from the beginning and Lila tries everything she can to escape, but with little effect.

Elena has her own problems. She studies for her final exams, but she feels like a fraud. She is intelligent, but does not have the brilliancy of Lila’s mind. Speaking Italian instead of the dialect does not come easy to her and although she learns how to hold conversations about politics and the situation in the world, deep in her heart she knows she does not have the cultural background to really participate.

Her studies set her apart from the neighbourhood and her family, her parents never ask her what she studies. Not because they are not interested, but because they are afraid they will not understand the answer.
Elena gets an unexpected success when her novel is published, but realizes that Lila is also at the basis for that. The two girls cannot break apart, no matter how different their lives have become.

The complex psychology of the friendship between Lila and Elena is told in detail, and this is very well done.

Lila helps Elena to pass her exams, but at the same time she is jealous of Elena and tries to make her feel incompetent. Elena feels that she is less than Lila and feels guilty over the freedom she still has and Lila will never have again. On the other hand she also blames Lila for certain things and the attentions Lila gets from Nino Sarratore, the boy Elena has been in love with for years, does not help the situation.

It is Elena who tell the story many years later and reads about the events she did not witness in the papers Lila gave to her. This allows Elena to explain things and this gives an extra dimension to the story, one that is very well done.

In total there are four books in this series. The third book has already been translated into English, the fourth book will come soon.

My review of My brilliant friend can be found HERE