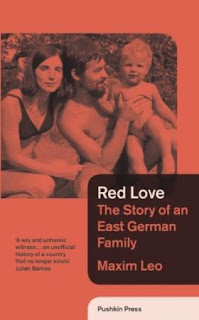 What is is like to grow up in a totalitarian state?

A state that decided for you if you could study or not or what profession you could have.

A state that kept a close eye on its people and where everything could be reason to be arrested.

A state that kept its people prisoner and told them it was for their own safety.

A state that distorted the truth and told its people that was freedom.

Maxim Leo grew up in the socialist state of East Germany. His mother Anne was a party member and believed in the ideals of the socialist state. This was due to her father who was one of the leading members in the state. Only when she found out as a journalist how she has to compromise with the truth she began to have doubts, although she was not ready yet to give up all her beliefs.

His father Wolf was an artist who did not believe in the DDR and who tried to find his own path within the system. This caused many arguments with his father in law.

When he was young, Maxim wanted nothing more than to be a West German. One of his favorite pastimes with his friends was to walk through East Berlin in their western jeans, with a map in their hands saying things like: ‘gosh, this does look different than on our side’.

When the Berlin wall fell the first thing he did was to make sure he had a passport of West Germany, so he would have no problems if the wall would close again.

Reading this book while I was in Berlin made it extra special, because I recognized things.

Red love is a very good book about the DDR and the people who lived in it, and a must read for everybody who is interested in European history.