Turner as an inspiration

October 09, 2015
The painter Turner was ahead of his time and many painters after him were inspired by his work and his style.

Two examples make this very clear. The first is the work Scarlet Sunset by Turner that was painted in the years between 1830 and 1840. It is quite small, but very beautiful. 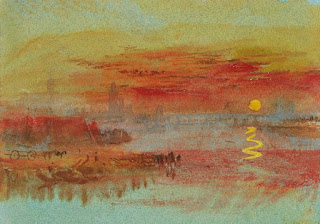 When the French painter Monet was in London in 1870 because his country was at war with Germany, he saw this painting and it inspired him to paint this:
This is the work that made a journalist call Monet and his friends Impressionists as an insult, but the name stuck and it became the name of a powerful and beautiful art-movement, Impressionism.
So, perhaps you can say that without Turner, there would have been no Impressionism.

The second example is also quite stricking. When Turner set up a painting, he painted the colours he wanted to use in watercolours on the canvas. These are known as colourbeginnings and we have a few that Turner started, but never finished into a painting.
Mark Rothko is a painter who loved huge and bold paintings, with enormous colourblocks. They look very much like Turner's colourbeginnings. It is known that Rothko admired Turner and he knew his work. So it is not a far step to think that these humble colourbeginnings also formed the beginning of the beautiful and colourful paintings Mark Rothko made.