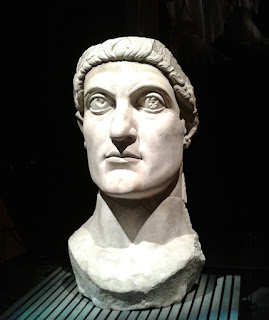 This was an important moment in the history of Christianity.

From the beginning Christianity had been a small group within the Roman Empire and they had a lot of competition from all the other religions in the Empire. And the Christians were prosecuted by many emperors.

In those first centuries it never looked like Christianity would once become the dominant religion in the empire.

Only this changed when Constantin had his dream. Constantin (who was only baptized himself when he was at his deathbed) stopped the prosecutions and actively helped the Christians. New churches were built and Christianity slowly gained a leading role.

Where you see elements of the different religions mixed together, this slowly changed until only the Christian elements remained. Within a couple of decades Rome had changed into the centre of the Christian world and it would influence the world for all centuries to come.

In Amsterdam there is an exhibition in the Nieuwe Kerk (new church) about these changes in Rome during the 4th century. The exhibition is set up very well and takes you from a multicultural city through the prosecutions to the triumph of Christianity.

It is very impressive, also because of all the special object that can be seen and are on loan from the Vatican or the Capitolinian Museums.

You can see for example the giant head and hand that once belonged to one of the statues of Constantin, but there are also a statue of Mithras, a statue of the good Shepard, and early depictions of Jesus from the sarcophaguses of the early Christians.