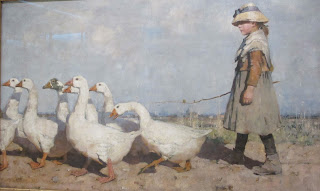 The Drents Museum in the north of the Netherlands has a new and exciting exhibition. In the Spring I was here for an exhibition about works by Kazimir Malevich, but now it was time for some boys from Scotland.

A group of Scottish painters who were friends and saw eachother regularly in Glasgow, hence the name for their group: The Glasgow boys.

The Glasgow boys took their inspiration from the French impressionists, but also from Dutch landscape painters and for example a painter like Whistler.

They did not want to paint romantic Scottish landscape that had been so popular with the older generation, they wanted to paint people and landscapes just as they were.

They also painted in the outside (en plein air) just as the French painters did, although in France the weather was often better than in windy and rainy Scotland.

They wanted to capture the moment and their style showed this and in this they also followed the French.
Slowly you see a change from painting farmers to painting middleclass people and scenes from modern day life. 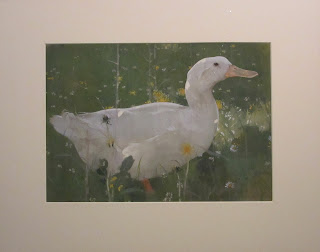 The exhibition I saw also shows the connections between the Scottish painters and their colleagues in other countries. Paintings by Jozef Israels, Anton Mauve and the French landscape painter Jules Bastien-Lepage can als be seen and this sets the Scottish group in a larger dimension.

There are almost eighty paintings and forty drawings and these give an absolutely amazing overview.
I never heard of the painters before and their works I did not know, but that is why I wanted to see it. I love the French Impressionists and I had high expectations.

Well, I did certainly not come to Assen for nothing. I absolutely enjoyed the beautiful landscapes, the impressions of Scottish nature and the portraits and much more. On the one hand you can recognize elements from the French Impressionists style, on the other hand these Scottish paintings have something that is completely their own. 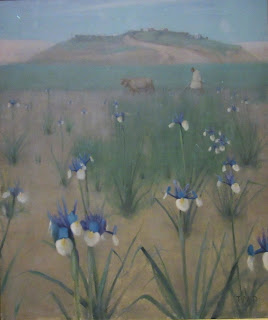 Great also to see the influences of other painters, but also how each painters interprets things in his own way.

I love that we have museums like this one who organize exhibitions like this and give you the opportunity to see something new and to broaden your horizon.

The exhibition can be seen until February 7th 2016, so if you have the chance, you will not regret it!
More information HERE
art inspiration museum