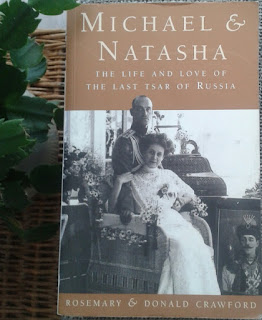 Michael Alexandrovich of Russia was born in 1878 as the younger brother of tsar Nicolas II.
As long as Nicolas did not have a male heir, Michael was the first in line for the throne.

In 1904 Alexei was born, but soon it became clear the boy had the deadly disease hemophilia and would probably not get older than twenty. Michael was still important as a potential emperor for Russia.

Members of the Imperial family had to obey certain rules. You had to ask the tsar for permission to get married and marrying a divorced woman was absolutely not done. People who did not follow the rules were banned from court and sometimes even from Russia.

Since Michael played such an important part in the future of Russia, it was crucial he did follow the rules. There was however one problem, he fell in love with Natascha, a married woman who was divorced before.

They began a passionate affair and they wanted to get married, especially when Natasha became pregnant. They would never get permission to do so and finally married in secret abroad. Nicolas was not happy with the way his brother disrespected his authority and was not planning on forgiving him any time soon. Michael and Natasha were not welcome in Russia for the moment.

Only when WWI broke out, did they come back to Russia and Michael became an officer in the Russian Army.

The war did not go well for Russia and there were many people unhappy with the way Alexandra managed the government and Nicolas managed the army.

In March 1917 (OS) Nicolas was forced to abdicate. People expected Alexei to become the new emperor, with Michael as his regent. But Nicolas also abdicated for Alexei, due to his bad health.

The crown of Russia was now offered to Michael. Many regiments swore loyalty to the new emperor and a Te Deum was sung in the churches in his honour. Natasha was just never mentioned.
Michael realized he could not accept the crown without the permission of the parliament, but this never came.

It was the Provisional Government and later the Bolsheviks who took over the government and the Romanovs did not have a role to play anymore. Lenin wanted to get rid of them and the threat they still were.
In July 1918, some days before the Imperial Family was shot in Jekatarinaburg, Bolshevik agents took Michael into the woods and shot him.

His death was never made official and for a long time there were rumours that Michael was in Siberia to lead an army against the Bolsheviks.
Natasha tried to escape from Russia and ended up in England, where she lived in poverty. She died in 1952 in a hospital for the poor in Paris.

A lot of attention in Russian history goes to Nicolas and Alexandra and this is understandable, but it is also very interesting to read about the other family members and how they lived.

This biography by Rosemary en Donald Crawford about Michael and Natasha is a good one. There are a little too many snide remarks directed towards Nicolas and Alexandra, but that is all. The rest is well written and well documented and they managed to bring Michael and Natasha closer to us.

According to all records Michael was an amiable and capable man, who could have been a good tsar were the circumstances different.
Natasha was seen by many at court as a golddigger and her two divorces to marry a richer man seem evidence to that. But when you read their story, it seems it was true love between Natasha and Michael. They had to put up with a lot together and the marriage did not bring her much profit. Until her death she never married another man, because she still mourned for Michael.

Such a very sad ending for both of them.