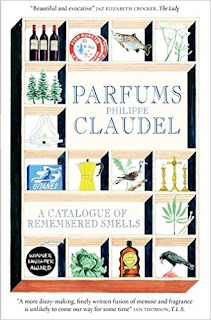 Smell and taste can bring back memories like nothing else can. Within a second they can transport you back in time.

The most famous literary example of this is of course Marcel Proust and his Madeline cake, but other authors also use it.

Philippe Claudel wrote sixty two short stories, impressions and memories all centrered around certain smells and scents of his childhood.

In a few pages he tells about the memory and the smell that belongs to that memory and sometimes he will start with a scent and then the memory follows.

From the smelly cheese his father bought that had to be kept outside the house, the menuire that had to be spread over the soil, the special motoroil that went into a moped, the ink at school, freshly washed sheets, the cinnamon that inspired fantasies of exotic destinations and the differences in smells between the tobacco of a Gitane or a Gauloise.

Smell is something incomprehensible to me and something I cannot grasp, since I have no sense of smell. I never had it, at least not as far as I can remember. I have never been able to imagine how warm bread, fresh coffee or a just mowed lawn smell. On the other hand, I also do not smell the odor coming from a dirty catlitterbox, and that is an advantage.

But Philippe Claudel has achieved the impossible: in his beautiful way of writing, his amazing sentences and poetic images he has given me the sense of smell. Or rather, for the first time in my life I have an idea of what it must be like to be able to smell. His words conjure up images that bring the scents to life. Scents I do not know, but now I can imagine them.

Parfums is for me a beautiful book, that again proves that Philippe Claudel is a great writer. One of the best as far as I am concerned.