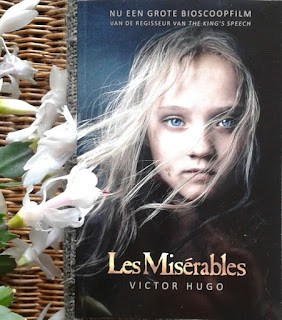 A man tries to better his life, but his past keeps haunting him. The story of Jean Valjean is the most well-known storyline in Les misérables.

The story
Jean Valjean is released from prison after serving a 19 year sentence. He only got a few years for stealing, but more years were added when he tried to escape.
He is now bitter and does not fit into normal society. Luckily for him he meets the good bishop of Digne, who manages to get Valjean on the right path.

Jean Valjean takes on a new name and forms a new life, doing a lot of good for the poor. Unfortunately police-inspector Javert does not want to give up and it is his mission to get Valjean to prison again.

Valjean and his foster daughter flee to Paris where they will have to survive among the many others who live in squalor.

Les Misérables is a typical 19th century novel in the sense that is has an array of characters, who all have ties to eachother. Some of those ties are a little to coincidental and that the same people bump into eachother all the time while they live amongst thousands of people in Paris is also not very believable.

Social injustice
But of course that is not the point. Victor Hugo wanted to write an outcry against the social injustice and show the French how wretched the poor were. If there are no provisions, then goodness, dignity and humanity hardly have a chance.

It is also a modern novel, since the story tells what happened in the France at that time. It starts in 1815 when Napoleon was finally defeated and the French Revolution was finished, and it ends with the June Revolution of 1832. Victor Hugo wanted to write what he saw and what had happened and what the results of those things were for the people.

And finally Les misérables is of course a novel about the power of goodness. It is the goodness and the kind heart of the bishop that helps Valjean get out of his bitterness, and the good works Valjean does after that, helps him find peace on his deathbed in the final chapter.
Goodness and forgiveness can be found amongst the miserable people, you just need to look a little harder.

Short version
The book is written in 1862, but Victor Hugo started many years before. He must have taken a lot of time, since the original volume had 1900 pages.

Did I read all of those pages? Unfortunately not.

I wanted to read Les misérables, since it is a French classic. And when I saw there was a modern Dutch translation, I bought it. Only when it came I realized I had made a mistake. My version only had 300 pages, and it was the shortened version.
There is at this moment no integral translation of this book in Dutch, so I think either I did not look in the right direction, or I have to turn to an English translation if I want to read the whole thing.

So, I am glad I now know the story, but I do feel like I missed out on something!