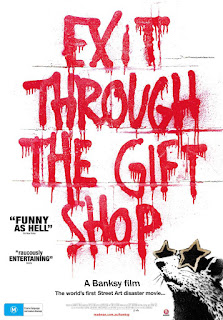 Banksy is one of the most famous and well-known graffiti-artists and makers of street-art. He has done work all over the world. He tries to make people think about what they see.

He made very distinct murals and also did a project where he made one pound bank notes, only with the head of Princess Diana and Banksy of England instead of Bank of England. The problem was the banknotes were accepted as payment on a festival and Banksy realized he could end up in jail for this, since the line between art and a crime was crossed.

We do not know who Banksy is, although there are (very strong) rumours. Contact with him is always through a middle-man.

Thierry Guetta was a French filmmaker who lived in LA. He wanted to make a film about Banksy and followed him with his camera, getting to know him better. He also got involved in some projects, like smuggling a Guantanamobay-puppet into Disney Land.

Bansky started to trust Thierry and allowed him to film him during his projects. There was however one problem, Thierry was a crap-filmmaker. He had a camera, but now idea how to make a film. The end result was unwatchable nonsense.
Banksy realized he was mistaken and asked Thierry to give him the filmmaterial, and suggested that Thierry would go back to LA to do another art project.

Thierry started to make street-art under the name of Mr. Brain-wash and tried to set up an exhibition. This almost went wrong, because Thierry had no idea how to do this either. But with the help of Banksy and his friends, it became an overnight success.

Exit through the Gift Shop is a very interesting film. Bansky is always in the shadows to keep his identity a secret, but the film gives a very good impression of the different projects he is working on and his methods.
The unexpected success of MBW (Thierry) and seeing how street-art works and how an exhibition is organized is also fascinating. Thierry was very lucky to have witnessed Banksy in action and has taken some lessons from him.

Only halfway through the movie you begin to think, you begin to doubt. Is this all real? Or is this perhaps one of Bansky’s many art-projects to make people wonder?
The way Thierry becomes an overnight success with what is basically a lot of bullshit, can be seen as criticism on the art world, but it could have been real.
Who is being made fun of? The ‘art-critics’ who ask no questions, the artists who are successful without having to work for it, or perhaps it is us, the viewers?

We do not know, it is as simple as that. On the internet there are many theories about this film, but the only one who know if Exit through the Gift Shop is real or a hoax, is Banksy himself.

This is a film that is worth your time!
art film/television