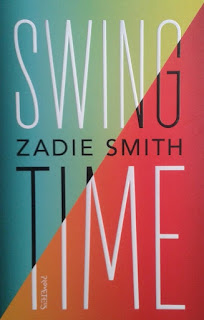 Most people want to improve their situation and most parents want their children to have a better life. But when is change really the better thing and how can you leave your position without forgetting where you came from?

The story
The main character in this story wants to dance, her problem is she has no real talent for it. When she is young, she attends a dance class and there she meets Tracey, the same age as she is and who also has one white and one black parent.

The girls become friends due to this, but not because Tracey is such a nice person. In fact, she is not nice at all and often you wonder why the girls are really friends.

The main character (we never get to know her name) defies her mum’s ambitions, who is very conscious of her black heritage and who wants her daughter to do a decent study and get a job that matters. Instead, she studies something vague and finally ends up as the personal assistant of a popstar, who is determined to do good works in Africa. And this is where things start to get wrong.

Choreography
When I bought Swing time by Zadie Smith I never read one of her books before and I only knew her name. I did have the idea that she is one of those important writers (how silly that may sound), a writer who does not only tell a good story, but also has something worthwhile to say.

That is a lot to live up to, but Swing time did not disappoint me. It is a beautifully written story, with many layers that also made me think about certain things.

I loved the way the story was built, almost like one of the choreographies of the dances that are so important in this book. In the first chapter you find out something has gone horribly wrong, and in the later chapters you find out what happened, while in the meantime you hear the story about the friendship with Tracey.

The friendship part is done very well, it tells about those moments when you were betrayed by people you thought were your friends and about all those embarrassing moments in your childhood that you knew you would never share with your parents.

The love of dancing is woven into the story, because the main character does love dance, although she herself has no talent for it. A lot of names and examples were given and I had the urge to look them up and see if I could find images of these people.

Africa
Race is also important in this book and everybody deals with things in a different manner. Tracey seems to dislike the fact she is half-black and tries to ignore it.

The main character’s mother is into black consciousness and is proud of her Jamaican and even African heritage (although she never went to Africa).

The main character herself does think about her cultural background, and has to deal with the fact that in Britain she is seen as a black woman, but in Africa she is seen as white, again as somebody who does not belong.

The situation in Africa takes up a large part of the book, and it also asks questions about charity and what this does with both giver and receiver of the charity. And how does the old colonial background play a part in this?

These are only a few things I mention, but I can assure you Swing time is a great book. The storylines are interwoven beautifully and it makes you think about your own place in the world.
I do not think this is the last book by Zadie Smith I read.