A daughter's a daughter, Mary Westmacott 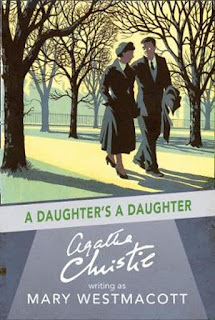 Ann Prentice is a widow, who is very close to her only daughter. While her daughter is away for a holiday in Switserland, Ann falls in love with Richard Caulfield. Yes, he is perhaps a bit stuffy and can be a bit pompous, but he is also kind and considerate and Ann knows the two of them will be happy together. So she agrees to marry him.

Only, when her daughter Sheila comes back from her holiday, she makes very clear to her mother she is not going to accept this new man. She fights it in every way she can and she wins, her mother will not marry Richard.

But the tight bond between mother and daughter is no longer loving, although on the surface it looks like Ann has created a cheerful life full of friends and diversions for herself and her daughter.

Years later when Sheila finds herself in a terrible situation, will Ann and Sheila be able to overcome their differences? In short, will Sheila be, despite everything, still be her mothers daughter?

A daughter is a daughter is a very subtle  portrait of the bond between a mother and a daughter and how can come close to be destroyed. Agatha Christie is as always a clever writer who knows how to set a scene or a character in just a few sentences.

My favorite character was Dame Laura, who was able to see through people and tell them the truth, even truths they did not like to admit. I loved her down to earth wisdom and kindness. Not one for empty gestures, but a great friend.

For us modern readers it may be a bit hard to believe that Ann is only in her forties and does nothing all day, only a bit of charitywork, and Sheila does a little thing with flowers, but the book was written in 1952!

Again, this book was a great example that Agatha Christie was also very good at writing novels, and I am looking forward to her other ones.