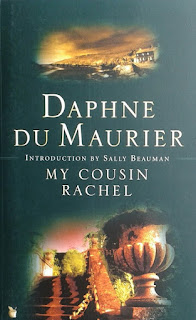 Philip Ashley grew up with his uncle, Ambrose on a large estate in Cornwall. There were no women in their lives, Ambrose did not need a wife, Philip did not need a mother. All he needed was Ambrose, who was father, brother and best friend to him.

When Ambrose got older, he went abroad for his health and this is where he met their cousin, Rachel. Philip was not too pleased when he received a letter that Ambrose married Rachel, that was the last thing he expected.

But then the letters from Ambrose grew darker and it seemed he was suspecting Rachel of something, and he begged Philip to come to Italy. Only when Philip arrived in Florence, he learned Ambrose just died a couple of weeks before and Rachel took refuge somewhere else.

Philip returned home, feeling hatred towards the woman who stole his uncle from him. And when she came to England, he was more than prepared to make her feel as badly as he did, only when he met her, he discovered she was nothing like he imagined. Rachel seemed kind and wise and humorous and within a short amount of time Philip was prepared to give her everything she might want and even more.

The only question is, is Rachel a temptress who ruined Ambrose and is now determined to ruin Philip as well? Or is she as innocent as she claims to be?

The genius of Daphne du Maurier is that she leaves this question hanging over the entire book. It never gets answered.

For every clue that Rachel might be a scheming woman who is out to ensnare poor Philip and to get her hands on the money, there are as many counter clues telling us Rachel is an innocent woman and Philip is a controlling and possessive man who gets more and more paranoid.

I really, really loved My cousin Rachel, much more than I ever thought I would. I loved how it made me keep guessing, and how my ideas shifted after almost every chapter.

Well, here are a few of the questions and ideas that came into my head while I was reading.

First of all, when Philip meets Rachel, he compares her with the beggar-woman he saw in Florence. And in a sense Rachel is in the same situation, since Ambrose did not provide for her in his will. He left her with absolutely nothing.

Secondly, we are meant to dislike Rinaldi because we only see him through Philip and Ambrose’s eyes, but it seems he is the only person who has Rachel’s interest at heart when he inquired about the will.

Thirdly, there is a lot of talk about Ambrose dying because of a braintumor, and there are also other family members who died because something was wrong in their head. Philip is not exactly a stable man, and he turns out to be more and more controlling and paranoid when time continues. His whole upbringing has not been normal and his actions and reactions are not within reason.

Fourthly, When Philip provides for Rachel, he expects her to stay with him in Cornwall, but why should she stay there when she has a life and friends and a house in Florence?

And finally, Rachel’s actions speak louder than words. She returned the jewels and when Ambrose and Philip were ill, she took care of them and nursed them back to health, while she could have left that to other people.

So on the whole, I am on Rachel’s side, but then again, I could be wrong.
Lark also read this book, so you can read her review over HERE