July 10, 2018
I am very interested in the Kennedys, and I know I am not alone. There are many books and films and series about this fascinating family.

A while ago I discussed three series about the Kennedys (here) and recently I saw two other series.

These are The Kennedys (2011) and The Kennedys, after Camelot (2017). These were made after the books by Randy J. Taborrelli. The books (I am reading them at the moment) are quite good. 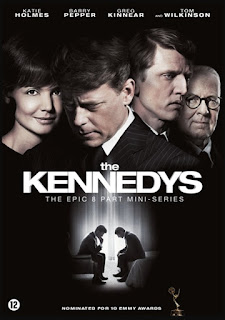 I really liked the first series, made in 2011. I know some historical mistakes were made, but on the whole I really enjoyed watching it.

It has eight episodes and I like how there are flash-backs to the past, the dealing of old Joe Kennedy and the first steps on the political field by John F. Kennedy. It gives you a better understanding of the history of the family and how the boys were raised.

I also like most of the actors very much. The problem is that for me Martin Sheen is the best Kennedy (I think I even prefer him to the real JFK!), and every other actor who plays JFK must at least be in the vicinity of Martin Sheen.
Well, Greg Kinnear does a very good job. He has the accent and the way of speaking, and looks enough like JFK to make it very watchable.

Barry Pepper plays Bobby Kennedy and Tom Wilkinson plays Joe Kennedy and I think they both do an excellent job as well.

There is the problem of Jackie Kennedy, who is played by Katie Holmes. But more on that in a moment.
So on the whole, series one is good and decent and if you are willing to overlook a few historical mistakes, you can really enjoy this. 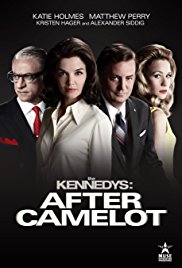 In 2017 there was the second series and I recently watched it.

It picks up at 1968, at the moment when Bobby gets shot. After that, we have three storylines. First there is Jackie who marries Ari Onasis and who must try to find a life for herself and her children. Then there is Ted Kennedy who must come out of his brothers's shadows and in the end there is John, Jackie's son, who also needs to find his own way.

The first problem is Katie Holmes. She is in my mind not a good actress. There were some later scenes where she was not horrible, but that is the kindest I can say.

I feel that in the first series she only got the job because she has a pretty face, but not because she can deliver a good Jackie. In the second series she has a lot more screentime, and it is very clear she is not good enough for this job.

Her accent and  the way she speaks are nothing like the real Jackie, and her hair is an even bigger mess.

The second problem was Matthew Perry as Ted Kennedy. If possible, Matthew Perry is an even worse actor than Katie Holmes is. He is terrible in every scene he plays.

A good actor, even when he does not look like the person he or she is playing, can make your forget that. Jonathan Rhys Meyers looks nothing like Henry VIII, but I believed him in The Tudors (we will not go into the historical mistakes in that series at this moment). My point is that Matthew Perry did not make me forget he was Matthew Perry, not even for a second.

The final problem was that the storylines were not interesting at all. Jackie and her marriage to Onasis was done badly, the death of Mary Jo Koppechne was dreadful to watch, the ending was weird and in the end I did not care for all of them at all.

So frankly, this second series is not really worth watching.
film/television history