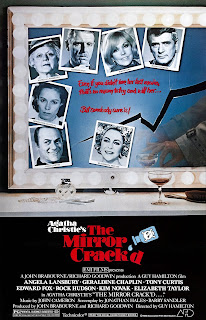 It is not a secret I love Agatha Christie and I also really enjoy the several series and films that are made after her books.

I already wrote about the films with Peter Ustinov as Hercule Poirot once (here), but in those years there was also a film with a Miss Marple murder mystery with Angela Lansbury as Miss Marple.

The mirror crack'd, is set in the fifties and a lot has changed, and movie actress Marina has rented Gossington Hall. The entire village is invited for a huge gardenparty, and during this party, a local woman gets poisened.

Miss Marple and her nephew inspector Craddock, will have to find out why this woman was murdered and if the murder was intended for Marina instead?

I think this is the only time Angela Lansbury played Miss Marple and I think she did a good job. Of course, some things are not correct, I do not think for a second that Miss Marple would smoke a cigarette after dinner!
But the film starts with a scene at the movie theatre in the village when the reel is broken and nobody knows how the film ends, except Miss Marple who happily explains the plot to the others. That was a good scene and I liked it.

The plot is largely intact and there is a lot of humor in it, especially between Marina and her rival Lola. The witty and sharp remarks are great fun to watch.

Lots of stars play in this movie, Elizabeth Taylor was Marina, Kim Novak played Lola, Edward Fox is a great inspector Craddock and there are also Tony Curtus, Rock Hudson and Geraldine Chaplin.


In short, this is a great film to watch if you want to be entertained!
film/television