Poirot, the greatest detective in the world, Mark Aldridge 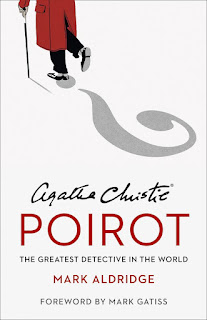 As a huge Agahta Christie fan, I was very excited to read this book. It came out last year, but somehow it took a long time to arrive in The Netherlands (Covid or Brexit, I do not know, perhaps even a combination). It arrived in April and I immediately began to read, and I was not disappointed!

Poirot, the greatest detective in the world, is an excellent book. Mark Aldrigde tells us the story of Poirot, for the first book he appeared in, to the last movie-adaptation. He covers all the books, the short stories, the plays, television, radio and film adaptations and explains what Poirot does, how he changes, what happenes to him and of course, what happed to Agatha Christie at the same time.

He uses letters and Agatha Christies own words to give us extra information. He also subly and sometimes dryly gives his own opinion, but always un such a way it does not distract.

This book came out because it was one hundred years ago, in 1920, Poirot first appeared in a book. (The mysterious affair at Styles) Since then, he has been a huge succes and very popular with the public.

I love Poirot, he always has been, and probably always will be, my favorite detective. I love Captain Hastings, Miss Lemon, Inspector Japp, Ariadne Oliver and other creations within the Poirot universe as well. I also really enjoy all the little character traits and things he says, even though I can understand that at one point Agatha Christie was a bit fed up with him.

Even though you know a lot about Poirot, this book will still give you new information and new insights, and it is very well written.

In short, this is the sort of book every fan of Poirot or Agatha Christie will want to read and have on their bookshelves, and I loved it!