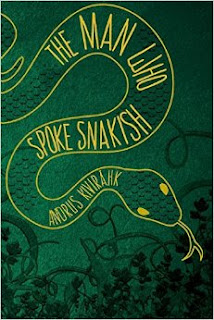 This again is one of those books I bought because I absolutely loved the cover. The Dutch cover is beautiful. It was a gamble, since I never read a book from Estonia before, but it paid off.

The man who spoke snakish is a fantastic fairytale, full of magic, strange beings and dry humor. Snakes with wise words, bears who seduce women, wolves that you can milk, an insane druid, a village full of idiots, apes in a tree who breed lice, a grandfather who can fly and a young man who has to seek his own path amongst all this.

The story is set around 1200, when the Baltic stated were Christianized by the knights of the Teutonic order. These ‘iron men’ and the monks bring a new way of life, and often not in a gently way.

Leemet is born in a village, but his mother moved back to the woods because she did not like the village lifestyle.
Still, the times are changing, and more and more people leave the woods to live in a village and work the lands. The villagers now feel better than the people in the woods, because they know nothing of the modern ways the iron men brought, although the villagers themselves often only understand half of it.

Leemet is taught the language of the snakes by his uncle Vootele, the language that can be used to communicate with animals. This language is mostly forgotten and soon Leemet is the last one who has the knowledge. Leemet is used to being the last one, in the woods he was the last boy and when he stays in the village for a while, he is the last heathen.
In the end he will also be the last person to know the Frog of the North, who used to help the Estonians against their enemies, but that has been asleep for centuries and will not wake again, since there are not enough people who speak snakish to wake him.

When people start to live in another way, it is all too easy to see this as the best way and to look down on the old way. The villagers who were born in the woods do not want to know about it anymore. Their connection to nature has been severed  and the woods are no longer a place where you can be and that you understand, it has become a dangerous place full of wild animals and supernatural beings who mean to harm you.
Others cling to the old ways of life, even if the meaning of the rituals is no longer clear, they refuse to see the world is changing. The druid and Leemet’s neighbours in the woods are examples of these people. They dream of going back to the old days and try to keep the new world at bay with meaningless rituals and offerings.

Leemet is kind of a prisoner between these groups. In the woods he is a free man, but he is also lonely, in the village there are people, but there he has to obey all kinds of silly customs. It is not easy to find your own way in all this.

The man who spoke snakish is a beautiful and original book, the modern way of speaking makes a very funny contrast with the medieval customs. Almost without emphasis big themes like loneliness, loss, resignation and finding a balance between tradition and modernity are part of this story. The light and funny way of writing makes sure it never becomes depressing.

Andrus Kivirähk studied journalism in Estonia and is a well known writer over there of several different genres. The man who spoke snakish was translated into French a couple of years ago, and a Dutch translation followed in May this year. In November an English translation will be available.
I am glad this special book will get more attention this way. It is absolutely worth it.