Summertime, all the cats are bored, Philippe Georget 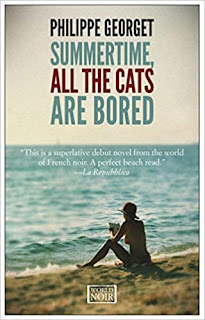 The title of this book immediately caught my eye. Summertime, all the cats are bored is a French thriller, and it is the first in a series. There is no Dutch translation, so I read it in English.

This book is published as French-noir and I can see why. There is something in the atmosphere that reminds you a little of Philip Marlowe. On the other hand I also felt some Maigret, but can also be because it is the French police.

I loved the atmosphere of this region, and I really liked Inspector Gilles Sebag. He is a balanced policeman, who also has a life beyond his work. The case is not too violent or overly gruesome and interesting enough to keep me guessing.

The only point I found a little disapponting is that the Dutch angle is not very strong. A few more details could have helped here, like proper last names (Braun and Verbrucke are not very Dutch), and for example the kidnapvictim thinks of her hometown, but the town itself is never named.

But on the whole I really enjoyed this book and I am glad I have the next two books in the series already in my bookcase. These are Autumn, all the cats return and Wintercrimes. (I think there will be at least four books in this series)